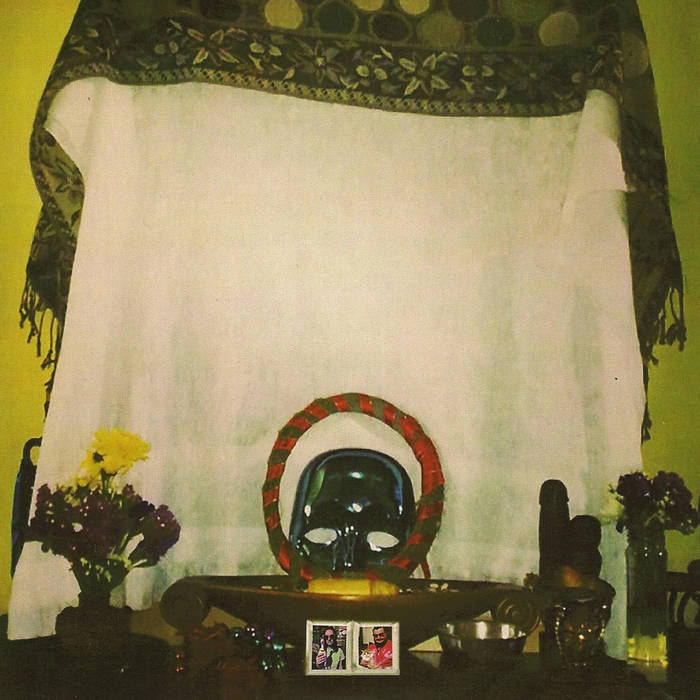 All tracks played and recorded by müriscia divinorum & aphra cadabra circa 2009.

'Well if you must try attracting our attention, then introducing or more so describing your release as ‘cannibal electronic ghost drone horror’ ought to do the trick and ensure it gets a celebratory witching hour listening, though now having emerged from out of the other side of Vluba’s three track offering ‘Altar’ by the skin of our teeth, I’m now beginning to wonder whether such a move was the wisest we’ve ever endeavoured. These ghoulish dudes hail from Argentina, whose under ground scenesters, whenever we’ve had the fortune to hear, do appear to have a thing for sounds dreaded in a despairing light sucking hue, this release all the more qualified in grimness as it comes endorced and released by those bad boys over at aethetic records whose recent Hole House visitation still creeps the beejeezus out of us. ‘Altar’ is as it says on the tin a whole dark world of the doomed and despairing, both eerie and at times supernatural, it’s a light resisting graveyard of horrorphonic unworldliness emerging from a place located in the darkest shadows of the blue Sabbath black cheer psyche, both the elongated suites ‘the darkest of light’ parts 1 and 2 suffocating to relocate the listener in fog bound and withering wastelands where walk the forgotten, the chill and the disquiet is oppressing and something we suggest ought only to be visited upon, should indeed you dare or foolishly wish, during daytime hours, ‘part 2’ being the lesser gruesome of the pair yet still managing to unseetlingly sound like an eerie dream dazed slab of hypno trippiness finding the Radiophonic Workshop cobbling out frequency bending and dimension blurring stone tape experiments under the watchfully enquiring eye of Dr Quatermass. All said nothing quite prepares for ‘android qayinn’ which just lets say for arguments sake, imagine or recollect all the strangest moments from Beta Lactam Ring’s more out there back catalogue moments and increase their weirdness by say, a factor of 10, and frankly your still no nearer the detaching weirdness.'

"... it erodes the individual and throws a psychedelic blanket of sound out. No longer doing a call and response jam with your buddy but morphing into one mighty being for an incense drenched trance ritual."

"...this is competent, interesting improvisation, by a duo that know what they're about, as they lead me by the neck down the corridors of their slime pit wormhole."